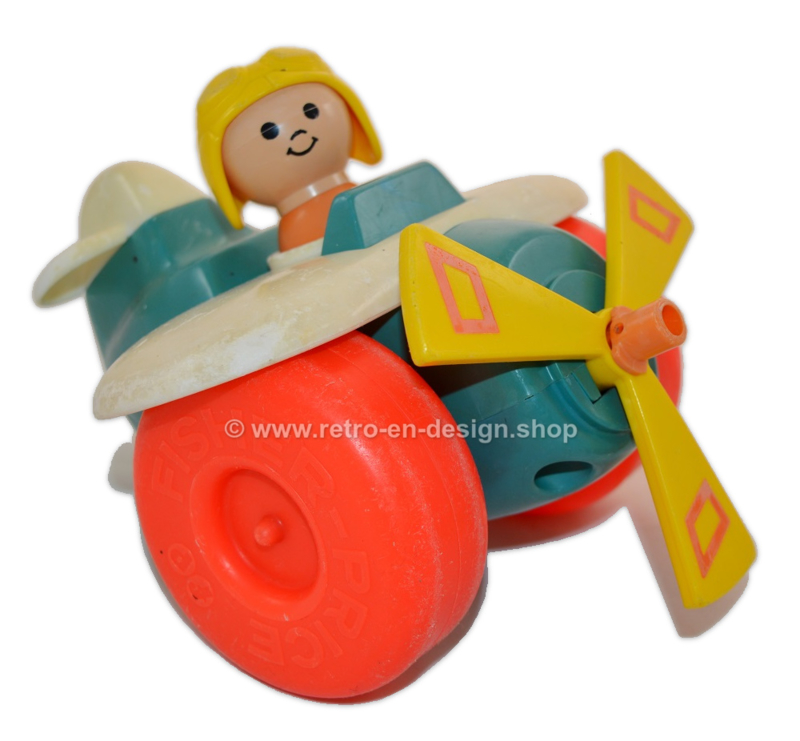 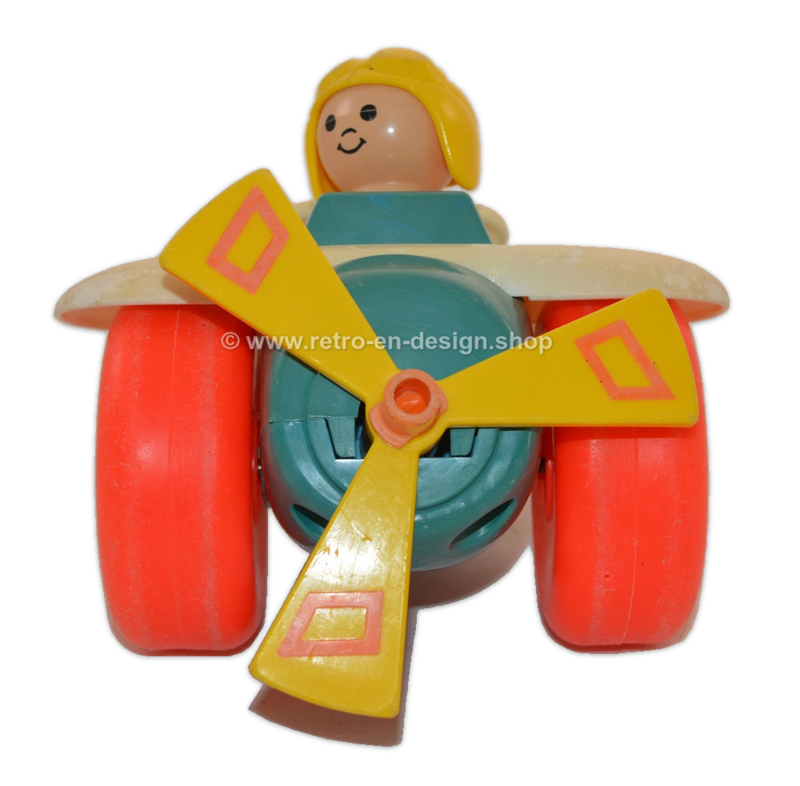 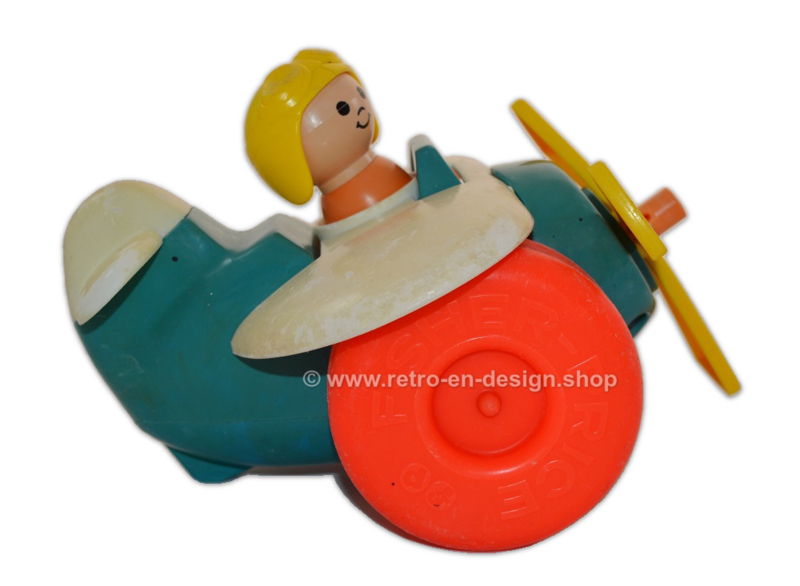 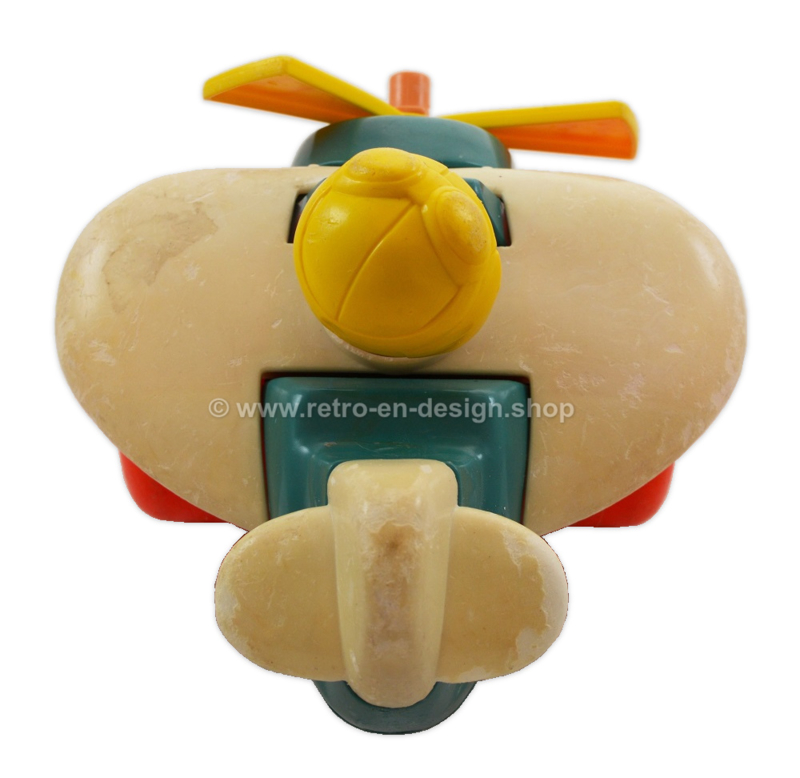 The pilot can rotate his head and when the wheels ride on the ground, the blades turn and make a sound.

Description
A gorgeous old vintage plane from Fisher Price with beautiful traces of use. In the colors orange, green and yellow. Also very suitable as a decoration piece in a baby room or nursery.

Condition
This beautiful toy by Fisher-Price is in a used vintage condition with multiple traces of wear. 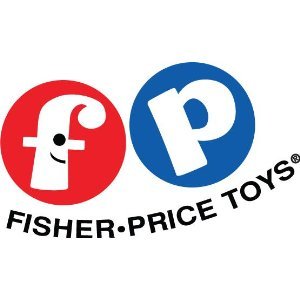 Fisher-Price is an American company that produces educational toys for children and infants, headquartered in East Aurora, New York.

Founded in 1930 by Herman Fisher, Irving Price, Price's illustrator-artist wife Margaret Evans Price, and Helen Schelle, the name Fisher-Price was established by combining two of the three names. Fisher worked previously in manufacturing, selling and advertising games for a company in Churchville, New York. Price had retired from a major variety chain store, and Helen Schelle previously operated Penny Walker Toy Shop in Binghamton, New York. Fisher-Price’s fundamental toy-making principles centered on intrinsic play value, ingenuity, strong construction, good value for the money, and action. Early toys were made of heavy steel parts and ponderosa pine, which resisted splintering and held up well to heavy use. The details and charm were added with colorful lithographic labels. Mrs. Price was the first Art Director and designed push-pull toys for the opening line, based on characters from her children's books.

In 1931, three of the four founders took 16 of their wooden toys to the American International Toy Fair in New York City and they quickly became a success. The first Fisher-Price toy ever sold was "Dr. Doodle" in 1931. (The same toy, in excellent condition, would be worth a considerable amount in today's collectibles market.) In the early 1950s, Fisher-Price identified plastic as a material that could help the company incorporate longer-lasting decorations and brighter colors into its toys. "Buzzy Bee" was the first Fisher-Price toy to make use of plastic. By the end of the 1950s, Fisher-Price manufactured 39 toys incorporating plastics.

During the 1960s, the Play Family (later known as Little People) product line was introduced and soon overtook the popularity of earlier toys. Herman Fisher retired at the age of 71 in 1969 and the Quaker Oats Company bought Fisher-Price the same year.

In 1991, Fisher-Price regained its independence from The Quaker Oats Company and became a publicly traded company. Two years later, in November 1993, Fisher-Price became a wholly owned subsidiary of Mattel. A new management group set the company’s focus on basic, infant and preschool products and began expansion into international markets. By 1997, Mattel decided to market all of its preschool products under the Fisher-Price name.