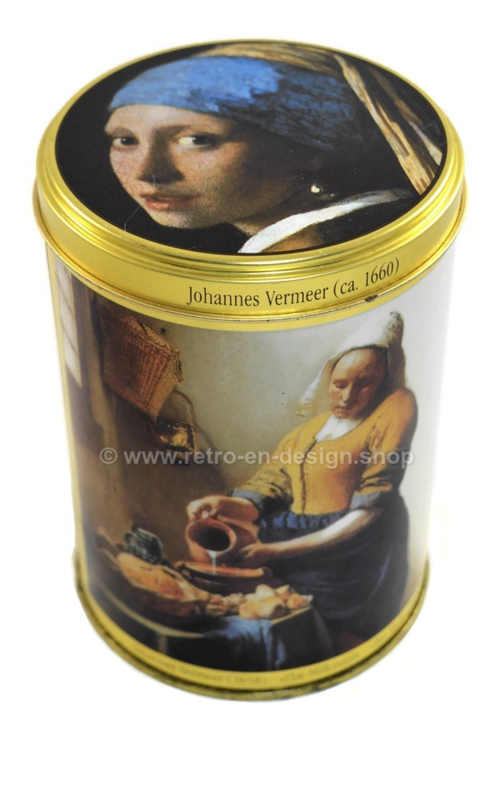 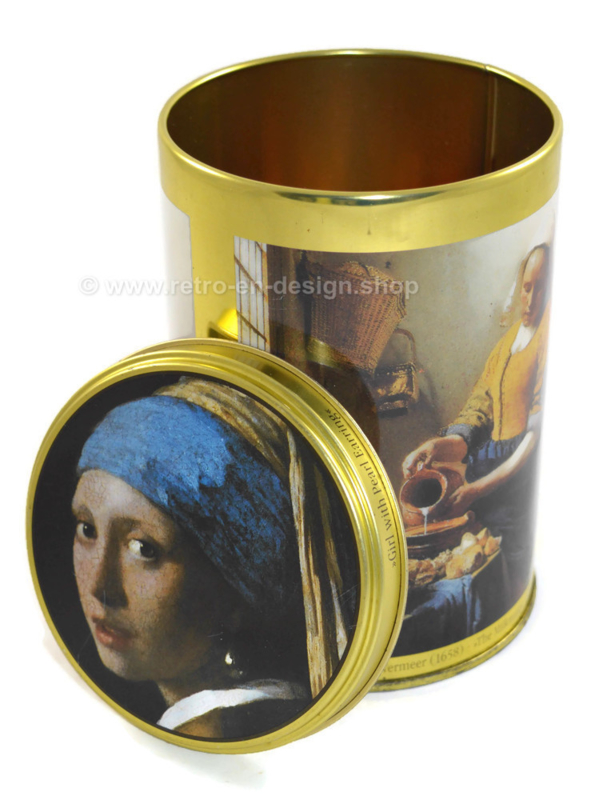 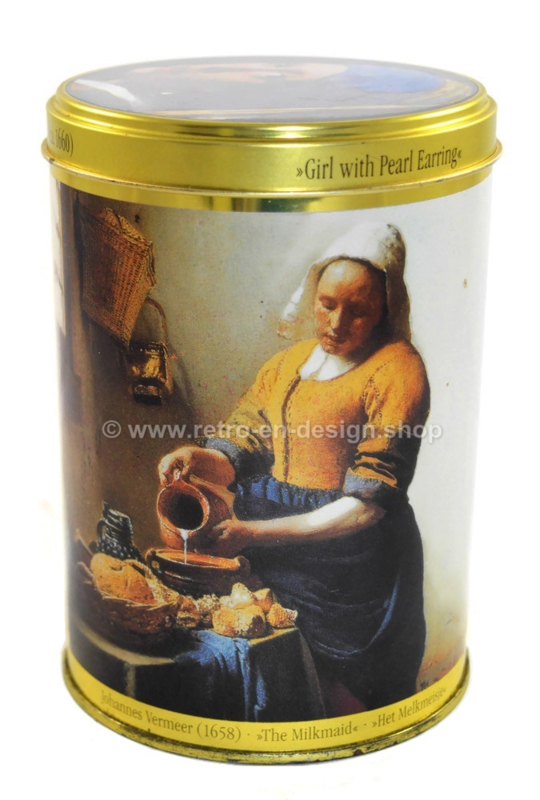 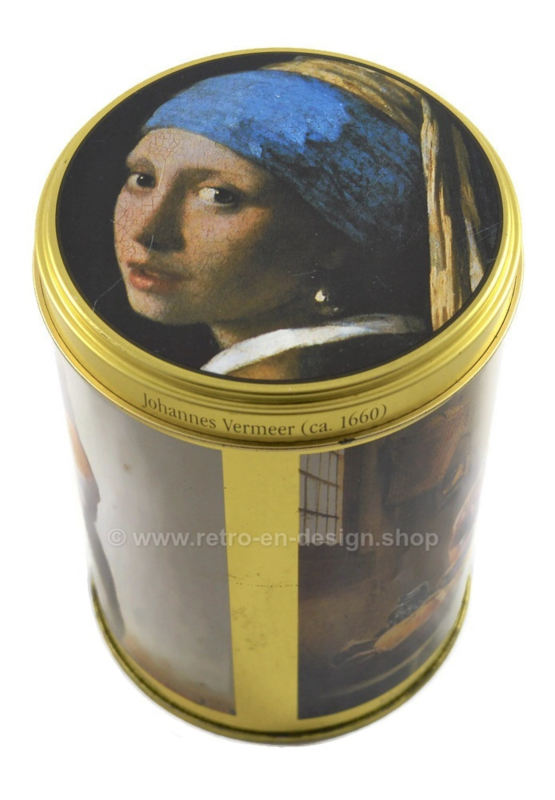 Tin "The Milkmaid - Girl with a Pearl Earring" Johannes Vermeer

Tin "The Milkmaid - Girl with a Pearl Earring" Johannes Vermeer.

Description
Cylindrical tin with a loose lid, the decoration of which consists of two of the most famous paintings by Johannes Vermeer. Namely "The Milkmaid" and "Girl with the pearl". Gold coloured background. Text in English and Dutch on lid and can.

Condition
This tin is in a good, tidy condition.

Johannes Vermeer (October 1632 – December 1675) was a Dutch Baroque Period painter who specialized in domestic interior scenes of middle-class life. He was a moderately successful provincial genre painter in his lifetime but evidently was not wealthy, leaving his wife and children in debt at his death, perhaps because he produced relatively few paintings.

Vermeer worked slowly and with great care, and frequently used very expensive pigments. He is particularly renowned for his masterly treatment and use of light in his work.

Vermeer painted mostly domestic interior scenes. "Almost all his paintings are apparently set in two smallish rooms in his house in Delft; they show the same furniture and decorations in various arrangements and they often portray the same people, mostly women."

He was recognized during his lifetime in Delft and The Hague, but his modest celebrity gave way to obscurity after his death. He was barely mentioned in Arnold Houbraken's major source book on 17th-century Dutch painting (Grand Theatre of Dutch Painters and Women Artists), and was thus omitted from subsequent surveys of Dutch art for nearly two centuries. In the 19th century, Vermeer was rediscovered by Gustav Friedrich Waagen and Théophile Thoré-Bürger, who published an essay attributing 66 pictures to him, although only 34 paintings are universally attributed to him today. Since that time, Vermeer's reputation has grown, and he is now acknowledged as one of the greatest painters of the Dutch Golden Age. Like some major Dutch Golden Age artists such as Frans Hals and Rembrandt, Vermeer never went abroad. And like Rembrandt, he was an avid art collector and dealer.

The Milkmaid (Dutch: De Melkmeid or Het Melkmeisje), sometimes called The Kitchen Maid, is an oil-on-canvas painting of a "milkmaid", in fact, a domestic kitchen maid, by the Dutch artist Johannes Vermeer. It is now in the Rijksmuseum in Amsterdam, the Netherlands, which regards it as "unquestionably one of the museum's finest attractions".

The exact year of the painting's completion is unknown, with estimates varying by source. The Rijksmuseum estimates it as circa 1658. According to the Metropolitan Museum of Art in New York City, it was painted in about 1657 or 1658. The "Essential Vermeer" website gives a broader range of 1658–1661

The painting shows a milkmaid, a woman who milks cows and makes dairy products like butter and cheese, in a plain room carefully pouring milk into a squat earthenware container on a table. Milkmaids obviously began working solely in the stables before large houses hired them to do housework as well rather than hiring out for more staff. Also on the table in front of the milkmaid are various types of bread. She is a young, sturdily built woman wearing a crisp linen cap, a blue apron and work sleeves pushed up from thick forearms. A foot warmer is on the floor behind her, near Delft wall tiles depicting Cupid (to the viewer's left) and a figure with a pole (to the right). Intense light streams from the window on the left side of the canvas.

The painting is strikingly illusionistic, conveying not just details but a sense of the weight of the woman and the table. "The light, though bright, doesn't wash out the rough texture of the bread crusts or flatten the volumes of the maid's thick waist and rounded shoulders", wrote Karen Rosenberg, an art critic for The New York Times. Yet with half of the woman's face in shadow, it is "impossible to tell whether her downcast eyes and pursed lips express wistfulness or concentration," she wrote.

"It's a little bit of a Mona Lisa effect" in modern viewers' reactions to the painting, according to Walter Liedtke, curator of the department of European paintings at The Metropolitan Museum of Art, and organizer of two Vermeer exhibits. "There's a bit of mystery about her for modern audiences. She is going about her daily task, faintly smiling. And our reaction is 'What is she thinking?'"

Girl with a Pearl Earring (Dutch: Meisje met de parel) is an oil painting by Dutch Golden Age painter Johannes Vermeer, dated c. 1665. Going by various names over the centuries, it became known by its present title towards the end of the 20th century after the large pearl earring worn by the girl portrayed there. The work has been in the collection of the Mauritshuis in The Hague since 1902 and has been the subject of various literary treatments. In 2006, the Dutch public selected it as the most beautiful painting in the Netherlands.

The painting is a tronie, the Dutch 17th-century description of a 'head' that was not meant to be a portrait. It depicts a European girl wearing an exotic dress, an oriental turban, and an improbably large pearl earring. In 2014, Dutch astrophysicist Vincent Icke [nl] raised doubts about the material of the earring and argued that it looks more like polished tin than pearl on the grounds of the specular reflection, the pear shape and the large size of the earring.

After the most recent restoration of the painting in 1994, the subtle colour scheme and the intimacy of the girl's gaze toward the viewer have been greatly enhanced. During the restoration, it was discovered that the dark background, today somewhat mottled, was initially intended by the painter to be a deep enamel-like green. This effect was produced by applying a thin transparent layer of paint, called a glaze, over the present-day black background. However, the two organic pigments of the green glaze, indigo and weld, have faded.

Theme
Johannes vermeer - The Milkmaid - Girl with a Pearl Earring