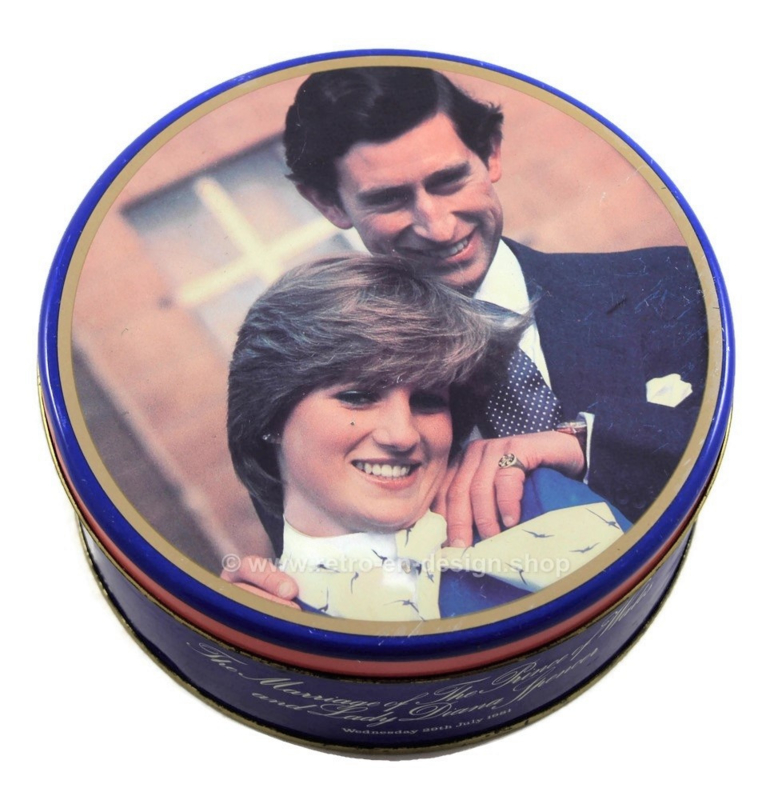 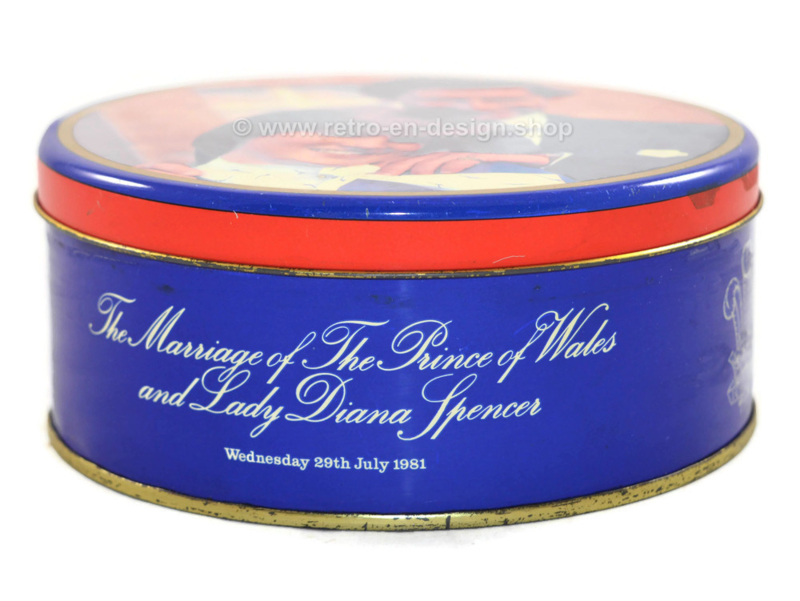 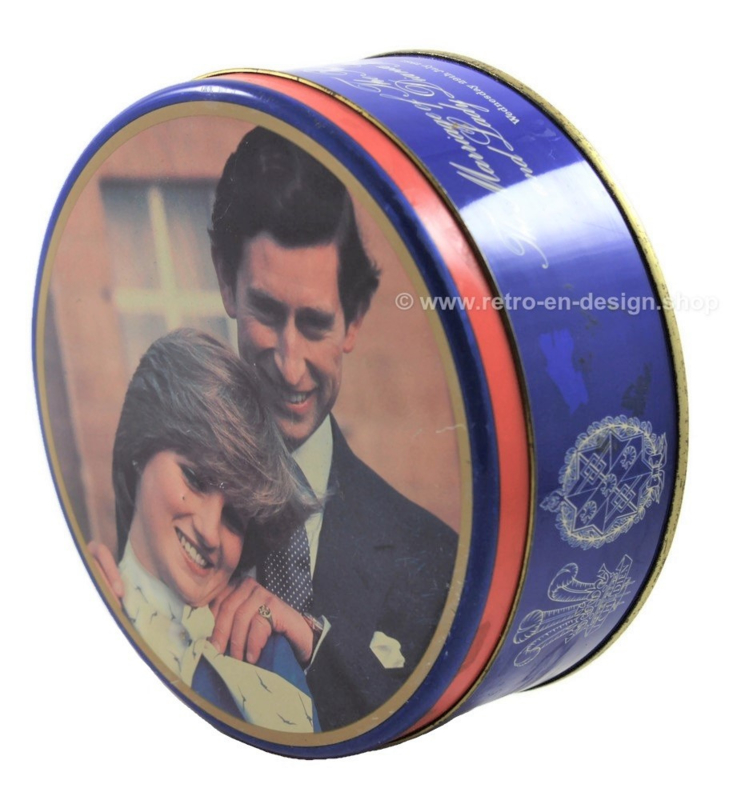 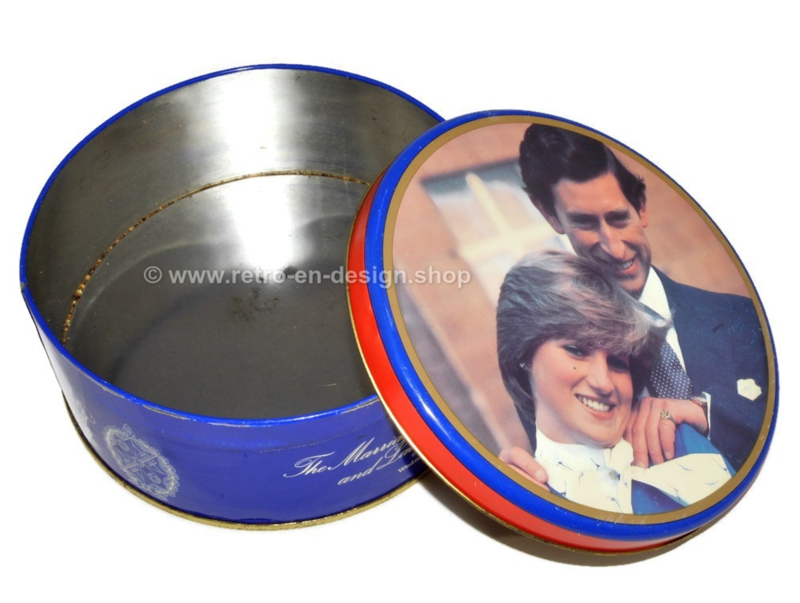 Description
Vintage biscuit tin from 1981 published by Crawfords in honour of the wedding of the Prince of Wales and Lady Diana Spencer. This tin is equipped with a loose lid.

The decoration of this tin consists of a dark blue background with a red border on top. The lid shows an image of the Prince of Wales and Lady Diana Spencer.

On the tin itself in white decorative letters the text: "The Marriage of the Prince of Wales and Lady Diana Spencer, Wednesday 29th July 1981"

Text at the bottom of the tin: Made in Great Brittain by Crawford's Liverpool. Petticoat Tail Shortbread.

Condition
This vintage cookie tin is in a good condition with normal traces of use and age-related traces of wear.

Diana, Princess of Wales (born Diana Frances Spencer; 1 July 1961 – 31 August 1997), was a member of the British royal family. She was the first wife of Charles, Prince of Wales, and the mother of Prince William, Duke of Cambridge, and Prince Harry, Duke of Sussex.

Diana was born into the Spencer family, a family of British nobility, and she was the youngest daughter of Viscount and Viscountess Althorp. She grew up in Park House, situated on the Sandringham estate, and was educated in England and Switzerland. In 1975, after her father inherited the title of Earl Spencer, she became known as Lady Diana Spencer, a style she would retain until her marriage.

Diana came to prominence in February 1981 upon her engagement to Prince Charles, the eldest son of Queen Elizabeth II. Their wedding took place at St Paul's Cathedral on 29 July 1981 and made her Princess of Wales, Duchess of Cornwall, Duchess of Rothesay, and Countess of Chester. The marriage produced two sons, the princes William and Harry, who were then respectively second and third in the line of succession to the British throne. As Princess of Wales, Diana undertook royal duties on behalf of the Queen and represented her at functions overseas. She was celebrated for her charity work and for her support of the International Campaign to Ban Landmines. Diana was involved with dozens of charities including London's Great Ormond Street Hospital for children, of which she was president from 1989. She also raised awareness and advocated ways to help people affected with HIV/AIDS, cancer, and mental illness.

Charles, Prince of Wales (Charles Philip Arthur George; born 14 November 1948) is the heir apparent to the British throne as the eldest son of Queen Elizabeth II. He has been Duke of Cornwall and Duke of Rothesay since 1952, and is the oldest and longest-serving heir apparent in British history.[2] He is also the longest-serving Prince of Wales, having held that title since 1958.[3]

Charles was born at Buckingham Palace as the first grandchild of King George VI and Queen Elizabeth. He was educated at Cheam and Gordonstoun schools, which his father, Prince Philip, Duke of Edinburgh, had attended as a child, as well as the Timbertop campus of Geelong Grammar School in Victoria, Australia. After earning a Bachelor of Arts degree from the University of Cambridge, Charles served in the Royal Air Force and Royal Navy from 1971 to 1976. In 1981, he married Lady Diana Spencer and they had two sons: Prince William (b. 1982)—later to become Duke of Cambridge—and Prince Harry (b. 1984)—later to become Duke of Sussex. In 1996.

Theme
The marriage of Charles, the Prince of Wales and Lady Diana Spencer