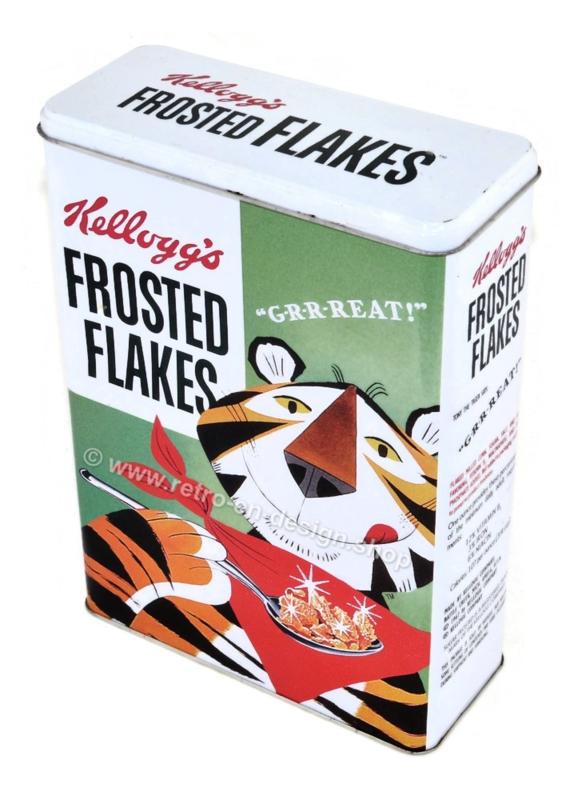 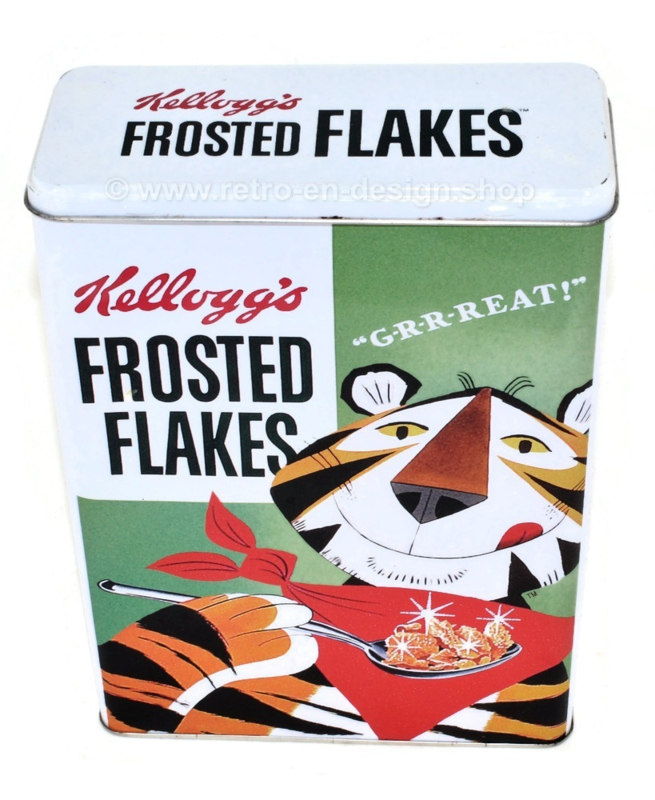 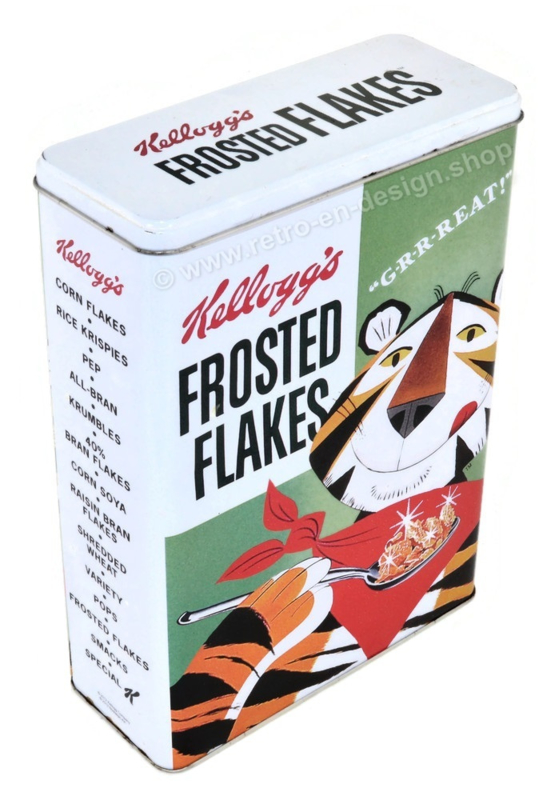 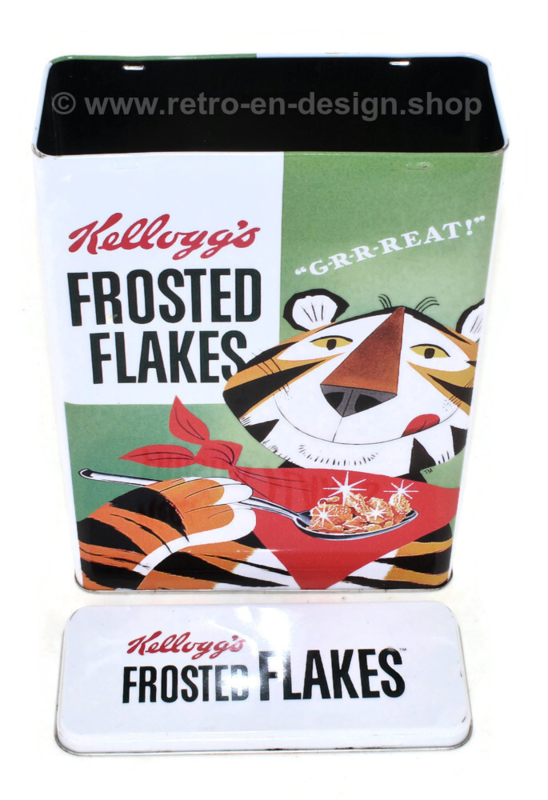 Description
Nice nostalgic retro storage tin for storing a whole pack of Kellogg's Frosted Flakes, called Frosties in Dutch. The tin is fitted with a separate lid. The decoration of this tin consists of an image as found on Kellogg's Cornflakes packs in the 1950s. Slogan on the front and back of the tin: "G-R-R-REAT!".

The Kellogg Company, often shortened to Kellogg or Kellogg's, is an American food manufacturer. Best known for Kellogg's cornflakes, the company is the largest producer of breakfast cereals in the United States.

Condition
This kellogg's storage tin is in a good retro condition with normal traces of use and age-related traces of wear.

Tony the Tiger
In 1951, Eugene Kolkey, an accomplished graphic artist, and Leo Burnett art director Edward Kern sketched a character for a contest to become the official mascot of a Kellogg's brand-new breakfast cereal. Kolkey designed a tiger named Tony (named after an ad man at Leo Burnett—Raymond Anthony Wells and selected Martin Provensen for the finished artwork. Tony competed against three other potential mascots for the public's affection: Katy the Kangaroo (originated by Robert Dulaney in the early fifties), Elmo the Elephant, and Newt the Gnu. Within the year, the other mascots were dropped (with Elmo and Newt never once gracing the front of the box), and Tony was given a son, Tony Jr. Tony the Tiger would eventually become a cereal icon. The final Tony the Tiger design came from a group of former Disney animators known as Quartet Films, which also designed The Jolly Green Giant, Snap Crackle Pop, the Hamms Beer Bear, and the Baltimore Orioles mascot, among others. Stan Walsh, Art Babbitt, Arnold Gillesspie, and Michael Lah were the artists/filmmakers that formed the Quartet Films of Hollywood.

The original Tony the Tiger was more typically tiger-like in shape and was sometimes depicted walking on all fours; he wore a kerchief around his neck and had a football-shaped head. The current appearance is of a tiger appearing to impersonate the fundamental muscular human-like structure and he generally walks on two feet.

The voice behind the famous "They’re gr-r-reat!" slogan was Thurl Ravenscroft for 50 years.

Tony the Tiger began his trademark debut with Kellogg in 1952. The Tiger was used as a cartoon character featured on every box of Kellogg's Frosted Flakes. The feline was federally registered as Kellogg's Frosted Flakes trademark. Furthermore, the registration and classification was under food products. Twelve years later one of the top oil companies, Esso (now ExxonMobil), began using a similar tiger as a promotional mascot for gasoline products. Exxon then followed through with protocol and federally registered its tiger under the petroleum products category. Unlike the Kellogg slogan behind the voice of Thurl Ravenscroft, "They’re gr-r-reat!", Esso also had a slogan, "Put a tiger in your tank"

Particularities
For a whole pack of Frosted flakes or Corn flakes