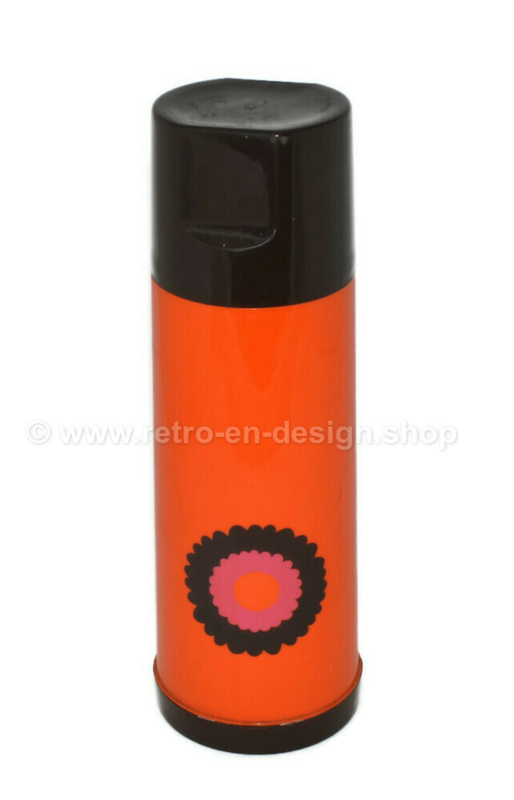 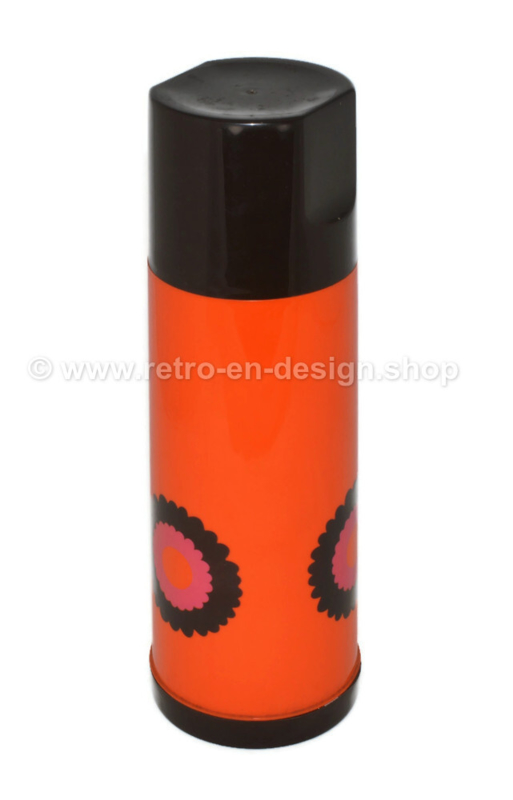 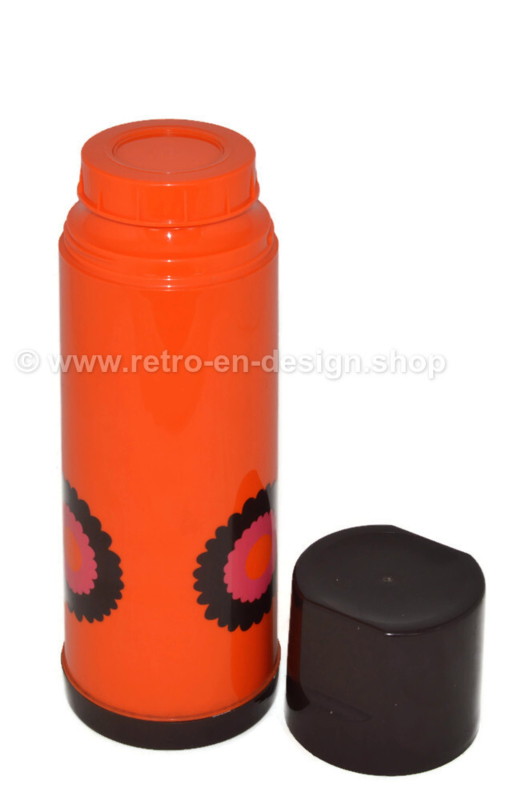 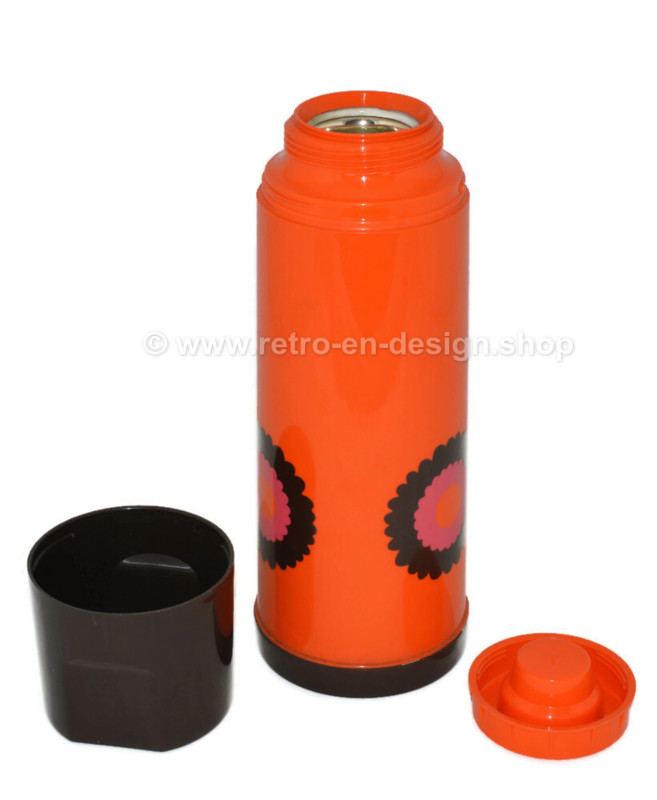 Description
Beautiful vintage Thermos made by Brabantia in collaboration with Tiger Plastics, large size. The decoration consists of the famous flower pattern on an orange background known as "Patrice" designed by Patrice van Uden.

This thermos has a screw cap and a cap that can also be used as a drinking cup. The inside is still very clean and the thermos is therefore still fully functional. Marked on the bottom: Tiger Products made in England

The popular Patrice design by Patrice van Uden was introduced by Brabantia in 1970. This design is recognizable by its brown and cyclamen coloured flowers on an orange background. The “flower element” was first cut from paper and then assembled, after which it was screen-printed in two colours for the “artisanal look” of the pattern. The design became one of the most popular Brabantia designs ever.

Condition
This thermos is in a neat vintage condition with minimal traces of use and age-related traces of wear. Pictures are part of the description.

Thermos
A vacuum flask (also known as a Dewar flask, Dewar bottle or thermos) is an insulating storage vessel that greatly lengthens the time over which its contents remain hotter or cooler than the flask's surroundings. Invented by Sir James Dewar in 1892, the vacuum flask consists of two flasks, placed one within the other and joined at the neck. The gap between the two flasks is partially evacuated of air, creating a near-vacuum which significantly reduces heat transfer by conduction or convection.

Vacuum flasks are used domestically, to keep beverages hot or cold for extended periods of time, and for many purposes in industry.

Tiger Plastics
The company started in 1950 and was located on the Eindhovens Kanaal in Eindhoven. The founders were Harrie van Kempen and Henri Nijhuis. The company's name was Tiger Plastics.

Originally, all kinds of plastic products were manufactured, including simple objects such as handles and soap dishes, a series of kitchen utensils under the name La Belle Cuisine (jugs, bowls, cups, orange presses and the like) and bathroom amenities (sinks, toothbrush cups, soap dishes, mirror frames and the like) among others. under the name Palma.

Due to the growth of the company, it was necessary to move in 1956 to the De Spaarpot industrial estate in the Braakhuizen-Noord district in Geldrop. In the same year they started to orient themselves on the international market and the company name was changed to Tiger Plastics. Around 1990 the name was changed again, now to Tiger, because not only plastics, but also metal, for example, were gradually incorporated into the products.

Brabantia is a company founded in the Dutch village of Aalst and manufactures metal and plastic household products. Today, the head office is located in Valkenswaard, North Brabant. Production no longer takes place in the Netherlands.

The company started in 1919 with 15 employees under the name Van Elderen & Co. It was originally a metal goods company that supplied to agriculture and the cigar industry: milk sieves, buckets, funnels, watering cans and cigar tins.

When it was founded in 1919, the company was named "Van Elderen & Co". After some time the name changed to "Van Elderen's Metalware Factories Brabantia". From about 1941 the first part of the name has been omitted, and it is only "Brabantia". Brabantia is the Latin word for Brabant (Dutch Province).

Brabantia was founded in 1919 in the Dutch town of Aalst by a group of 15 people. A family business pur sang. Then and now. With a firm belief in honest products, made by people with a heart for quality. Ideas focused on sustainability - designed for living.