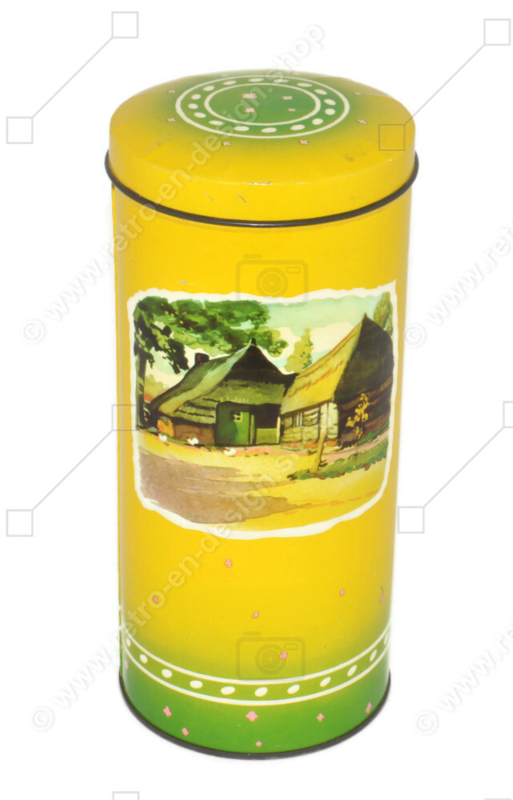 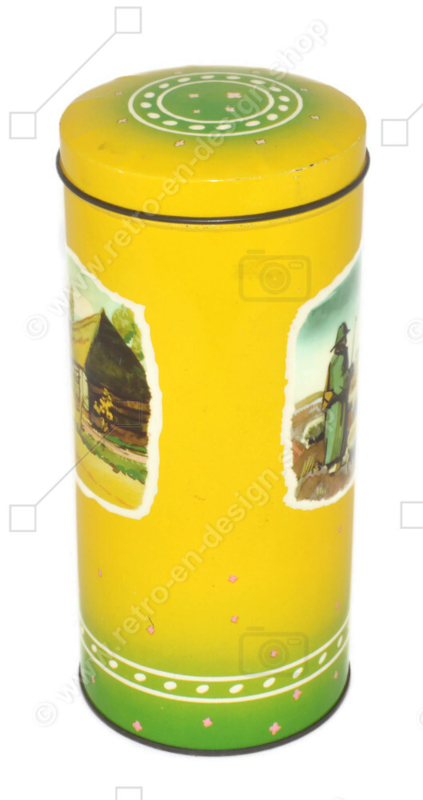 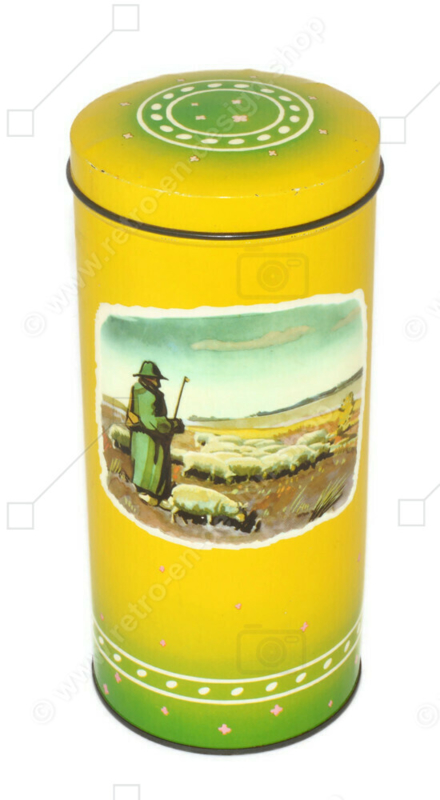 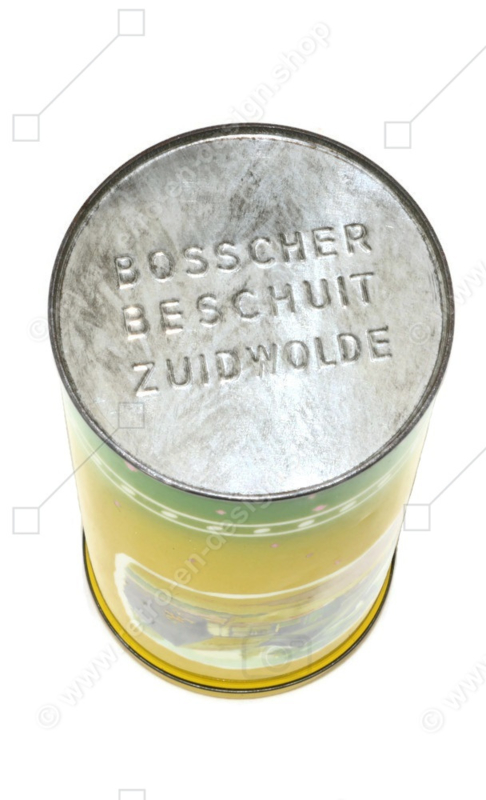 Description
Beautiful vintage rusk tin from Bosscher rusk Zuidwolde. This tin cylindrical biscuit tin is equipped with a loose lid. The decoration of this bus consists of a bright yellow background with green details. The tin has two images. On one side a shepherd with flock and on the other side a sheep farm. This tin has a longitudinal seam at the back.

This biscuit tin is marked at the bottom with the inscription: "Bosscher Beschuit Zuidwolde".

Condition
This tin biscuit tin is in a good vintage condition with normal traces of use and age-related traces of wear. Photos are part of the description.

A rusk is a hard, dry biscuit or a twice-baked bread. It is sometimes used as a teether for babies. In some cultures, rusk is made of cake, rather than bread: this is sometimes referred to as cake rusk. In the UK, the name also refers to a wheat-based food additive.

Netherlands and Belgium (Flanders)
Beschuit, also known as Dutch crispbakes, are light, round, rather crumbly, rusks as eaten in the Netherlands and Belgium. When a baby is born in The Netherlands, it is customary to serve beschuit met muisjes (with "little mice", which are aniseeds covered in a white and pink or blue sugar layer, depending on the newborn's gender). Beschuiten are also eaten as a breakfast food with a variety of toppings, most commonly butter and sprinkles in flavours such as chocolate (chocoladehagel or chocoladevlokken) or fruit (vruchtenhagel), jam or cheese. A longtime Dutch favourite is to serve strawberries on beschuit, which is usually topped with some sugar or whipped cream.

Beschuiten are made by first baking a flat round bread (beschuitbol), slicing it in half, and then baking each half again, usually at a lower heat. It is almost always sold in rolls; a roll typically has 13 rusks (a baker's dozen). Etymologically, biscotto (16th-century Italian), biscuit (19th century, from 16th-century bisket) and beschuit come from the Latin phrase (panis) bis-coctus, (bread, twice cooked).

United Kingdom
To the British, butcher rusk is a dry biscuit broken into particles, sorted by particle size and sold to butchers and others for use as a food additive in sausage manufacture. Though originally made from stale bread, now called "bread-rusk", a yeast-free variety called simply "rusk" is now more commonly used.

Various rusk particle sizes are used in the food industry, where uses include:

A carrier for flavours, colours and seasonings
A binding agent in hamburgers, sausages, stuffings, pies, and other compound meat products
As an ingredient for dried stuffing mixes