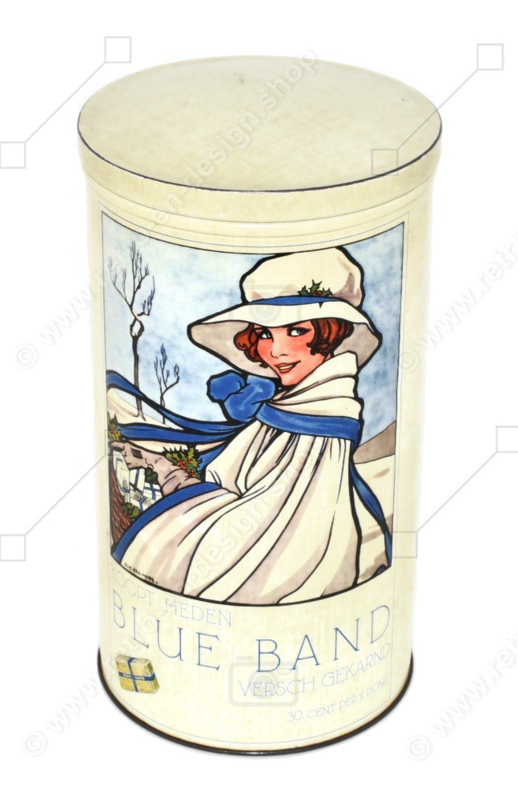 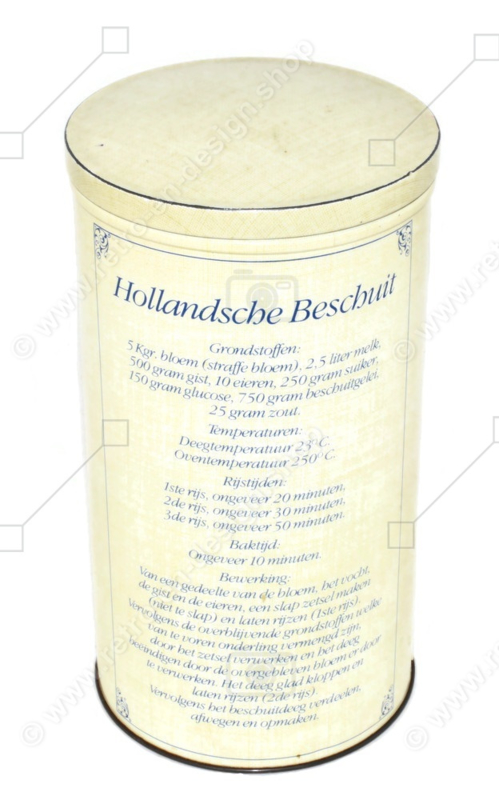 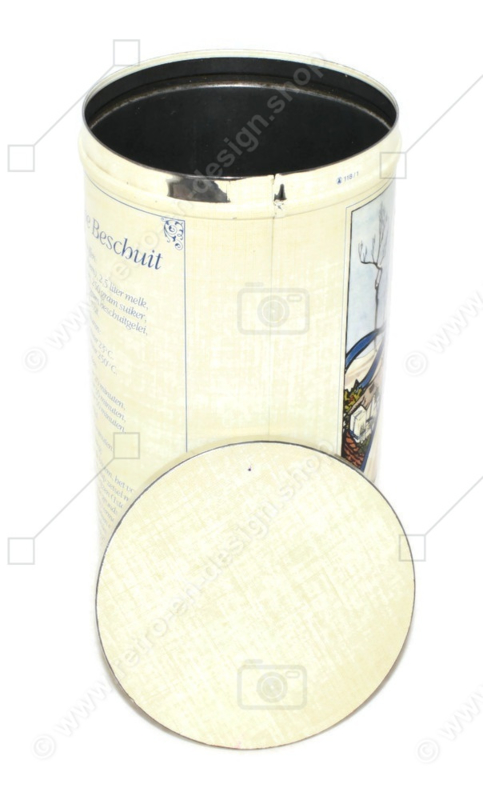 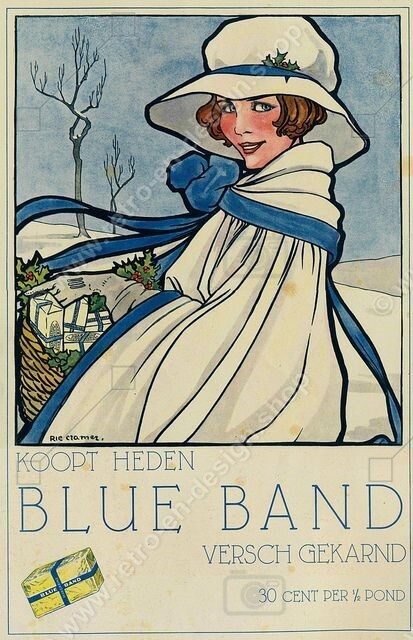 Description
Fairly rare vintage rusk tin with a loose lid. The decoration of this tin consists of a cream-white background with an illustration of Rie Cramer, the Blue Band girl with a hat with blue ribbon and her basket full of packages of Blue Band margarine on the front of the tin. On the back of the tin is a recipe for Hollandsche Beschuit (Dutch rusk).

Blue Band is a brand under which margarine products are originally marketed. Blue Band's products are available in the Netherlands, Belgium, a number of countries in Africa and Indonesia, among others. Blue Band was introduced to the Dutch market in 1923 but was previously available as an export brand of Van den Bergh in the United Kingdom and Belgium.

Until the 1940s, Blue Band advertised with the slogan "fresh churned", which was discontinued due to consumer deception. This was because it was wrongly suggested that it was a dairy product.

Condition
This Blue Band rusk tin is in a neat vintage condition with normal traces of use and age-related traces of wear. Photos are part of the description.

Marie "Rie" Cramer (10 October 1887 – 8 July 1977) was a Dutch writer and prolific illustrator of children's literature whose style is considered iconic for the interwar period.

Born in Sukabumi in what was then the Dutch East Indies, she was the daughter of Hendrik Cramer, a ship captain, and Elisabeth Frederica Schenk. She moved to the Netherlands with her mother and her youngest sister in 1896, where they settled in Arnhem. Stimulated by her aunt Gesine, an artist, she studied drawing in Arnhem.

Cramer is best known for her numerous illustrations for children's books, some of which she wrote, but she also illustrated adult literature including works by Shakespeare. For many years, she and Anton Pieck were the two main illustrators for Zonneschijn, a magazine that first appeared in 1924 and became the most important non-religious youth magazine of the Netherlands until it folded in 1943. She also created set designs and costumes for the theatre and for the Dutch pavilion at the 1939 New York World's Fair.

She began her career as an illustrator while still a student. Her early work was influenced by illustrators like Edmund Dulac, Aubrey Beardsley, and Arthur Rackham and had a distinct Art Nouveau style. From the 1920s on, her illustrations became more simplified and less lyrical. The colours as well became less nuanced and brighter under the influence of her work on stage costumes and sets. From the 1930s on, she worked less on children's books and started writing books for young adults. She also created art pottery together with her friend Fransje Carbasius, whom she had met at the academy in The Hague.