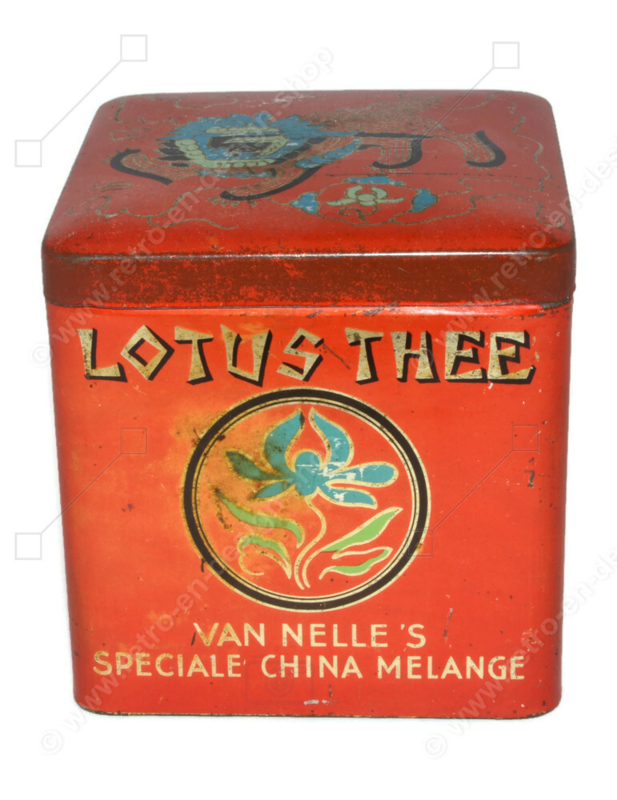 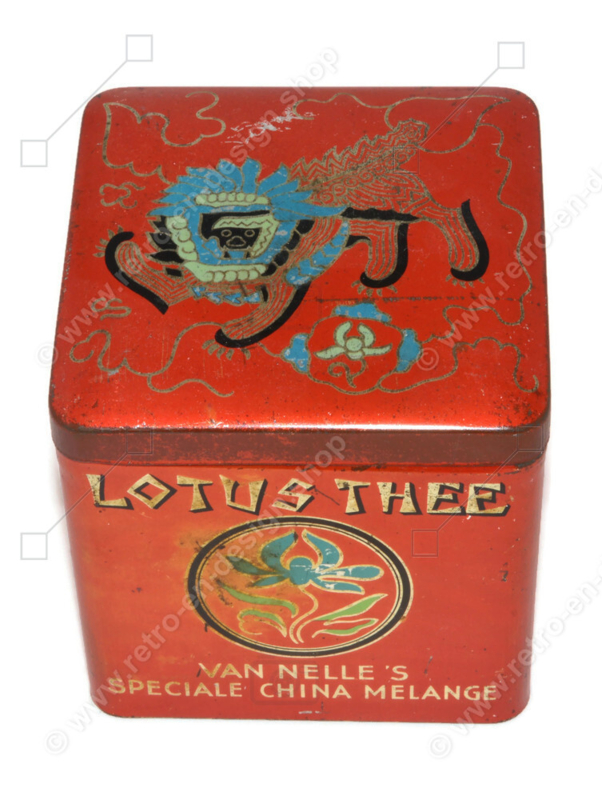 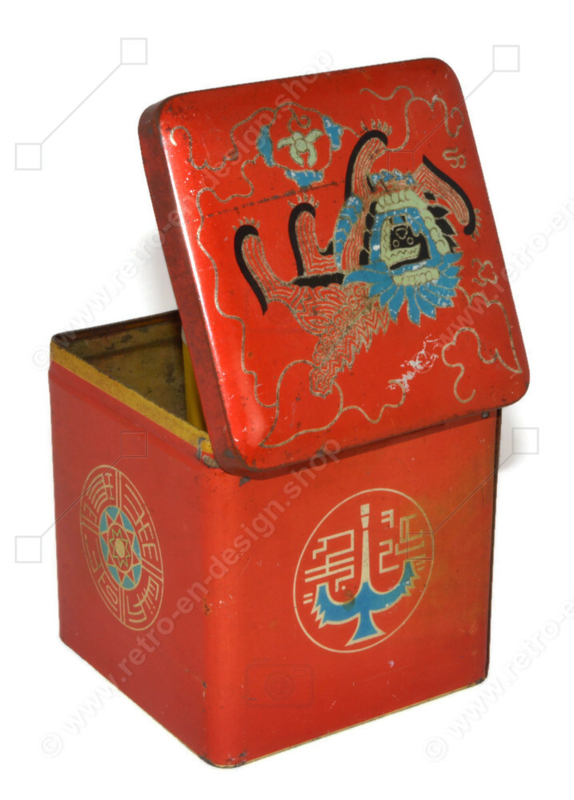 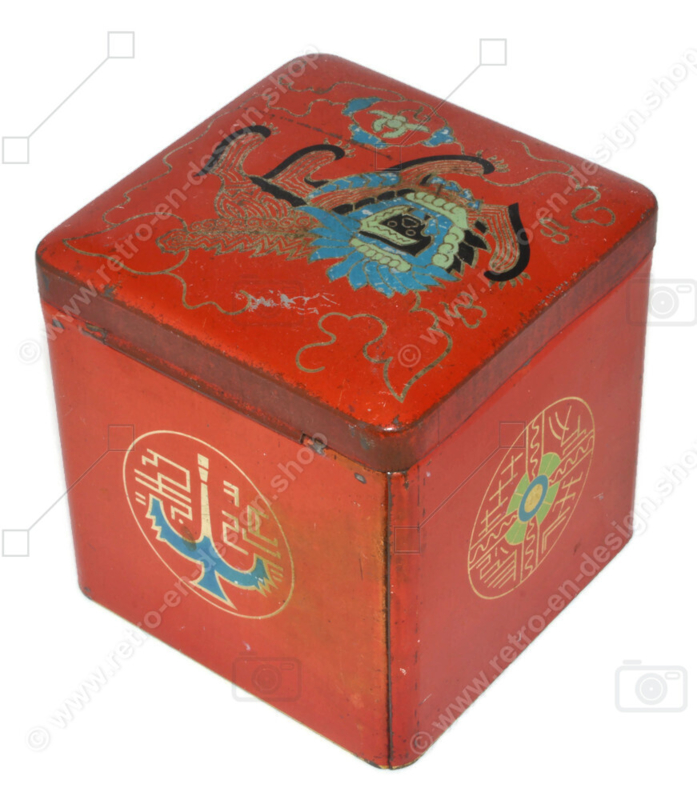 Vintage tin cube for tea by Van Nelle with an image of an Oriental lion.

Description
Tin drum in a cube shape for Lotus tea from Van Nelle. Fitted with a hinged lid.

The decoration of this tin consists of a dark pink to a red background with a stylistic image of an Oriental lion with a blue and green mane on top of the lid. On the sides of this cube various simple oriental decorations in gold and green/blue/black.

Marked at the bottom with a W in a Circle.

Condition
This tin cube is in a vintage condition with traces of use and age-related traces of wear. Photos are part of the description. 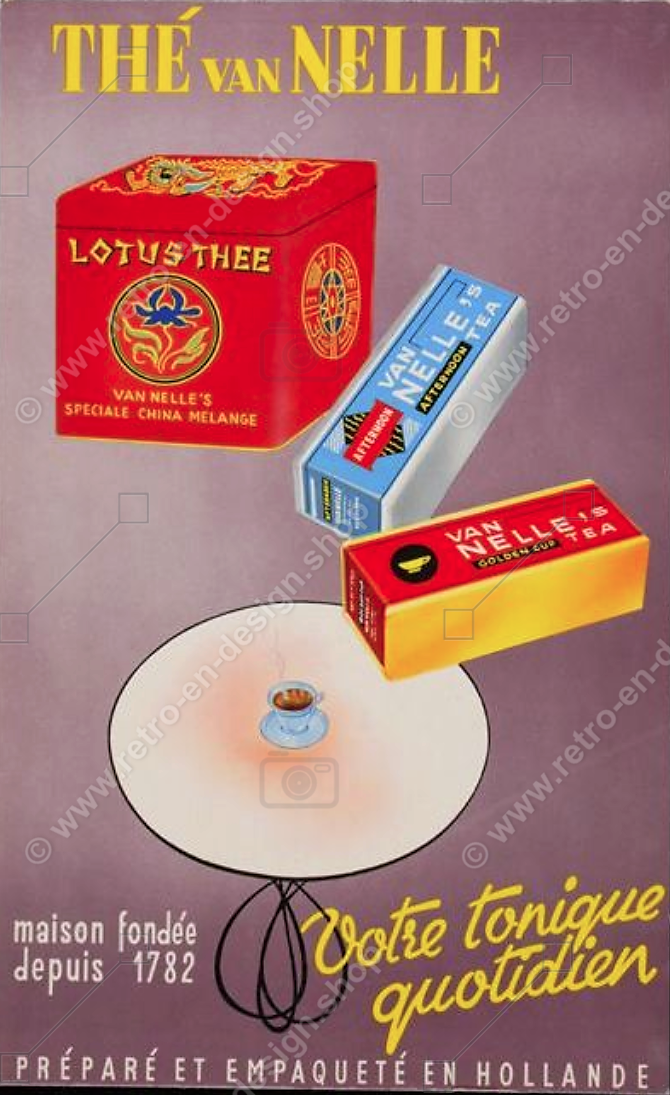 Van Nelle was a Dutch manufacturer of shag, cigarettes, coffee and tea in Rotterdam.

Jacobus Johannes van der Leeuw built the company between 1837 and 1881. He established global trade contacts, founded own plantations in Dutch India and built the shop into a factory for burning coffee and processing tobacco and tea. Around the turn of the century, coffee and tea became increasingly important. Van Nelle, therefore, went for the wind. The company distinguished itself by its own approach, with appealing advertising figures like Piggelmee. The period around World War II was difficult for Van Nelle. But since the fifties, it was under the direction of Director J.P. Coelingh better again. The introduction of the first freshly ground vacuum-packed coffee under the name Supra in 1962 has contributed significantly.

In 1916 the company Van Nelle bought a terrain along the Schie in the former Overschie municipality. Here, under the guidance of Cees van der Leeuw, the world-famous Van Nellefabriek was built by J.A. Brinkman and L.C. van der Vlugt. This factory became the New Build school example and was built between 1927 and 1929.

On October 1, 1954, the last Van der Leeuw retired from the management. Van Nelle became a public limited company. In 1977, American Standard Brands acquired all shares of Van Nelle after many years of cooperation. In 1985, the company became fully independent by a so-called management buy-out. In 1989 Van Nelle was acquired by competitor Sara Lee / Douwe Egberts. Douwe Egberts closed all production facilities and reduced Van Nelle to a brand name.

The Van Nellefabriek was recognized as a monument of cultural world heritage and added to the World Heritage List in June 2014 during the 38th session of the UNESCO World Heritage Committee.