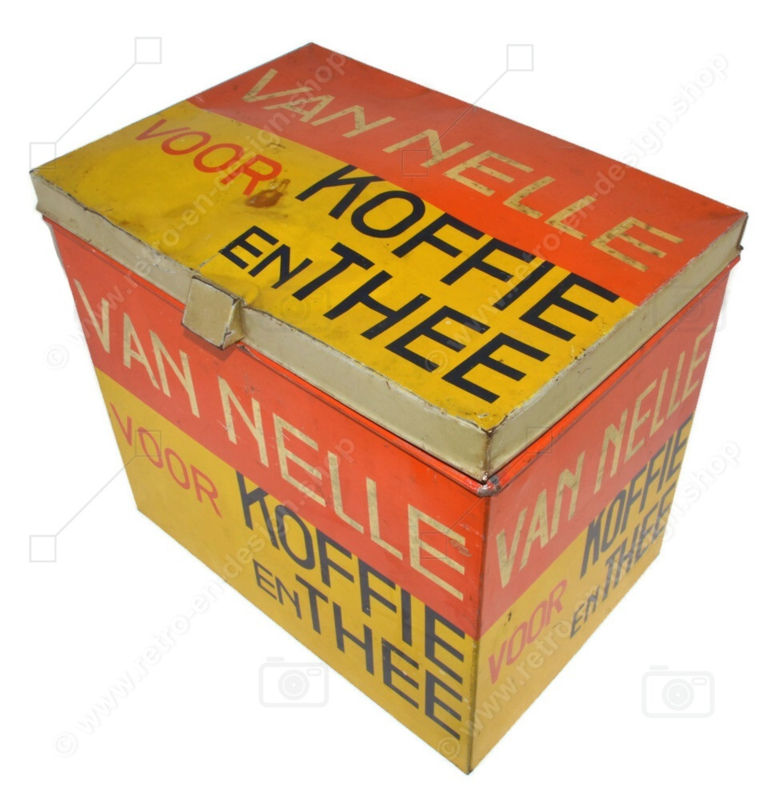 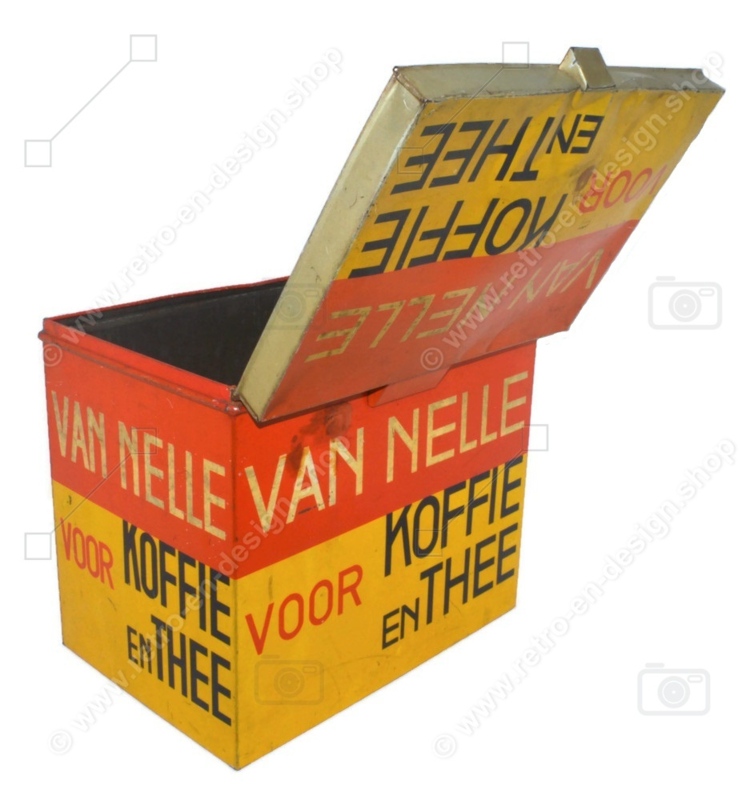 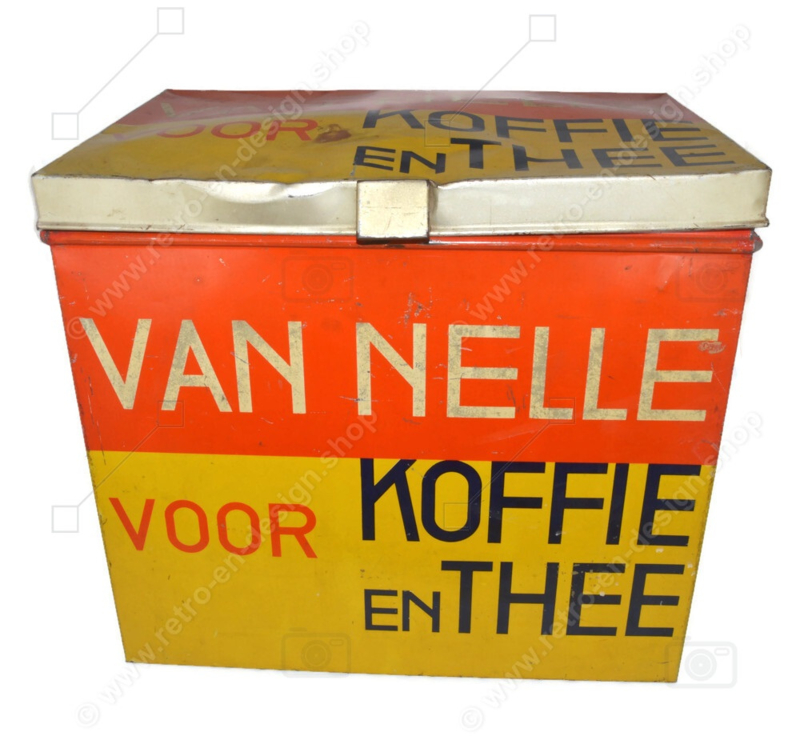 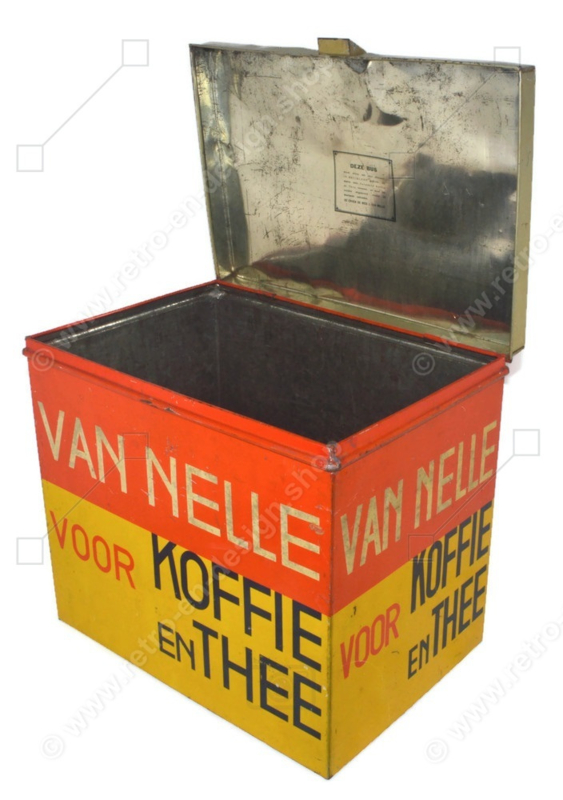 Shop counter tin for coffee and tea of ​​the brand Van Nelle, Rotterdam from 1930

Shop counter tin for coffee and tea of ​​the brand Van Nelle, Rotterdam from 1930

Description
Robust cool vintage/brocante shop tin by Van Nelle for coffee and tea in red and yellow. This Van Nelle shop tin is a design by Jac. Jongert. A revolutionary design in 1930, now a style icon and an example of Dutch Design. The printing is divided into a yellow area (bottom) and a red area (top) with lettering in the colours white, red and blue. The sleek and businesslike design stood for modern and progressive, the image with which Van Nelle wanted to distinguish itself from its competitors.

The tin has a seamed side seam, has a red lip for the lid and the rim of the tin is rolled over. The lid has a handle and is attached with hanging hinges. The bottom is attached to the outside with a flat seam.

Texts all around and on the lid: "VAN NELLE FOR COFFEE AND TEA".

Text on the lid on the inside in a black rectangular frame: THIS BUS is ONLY given to our customers, who store our Packaged Coffee and Tea in it, and must be delivered to us as soon as they stop doing so. THE HERITERS THE WED. J. VAN NELLE 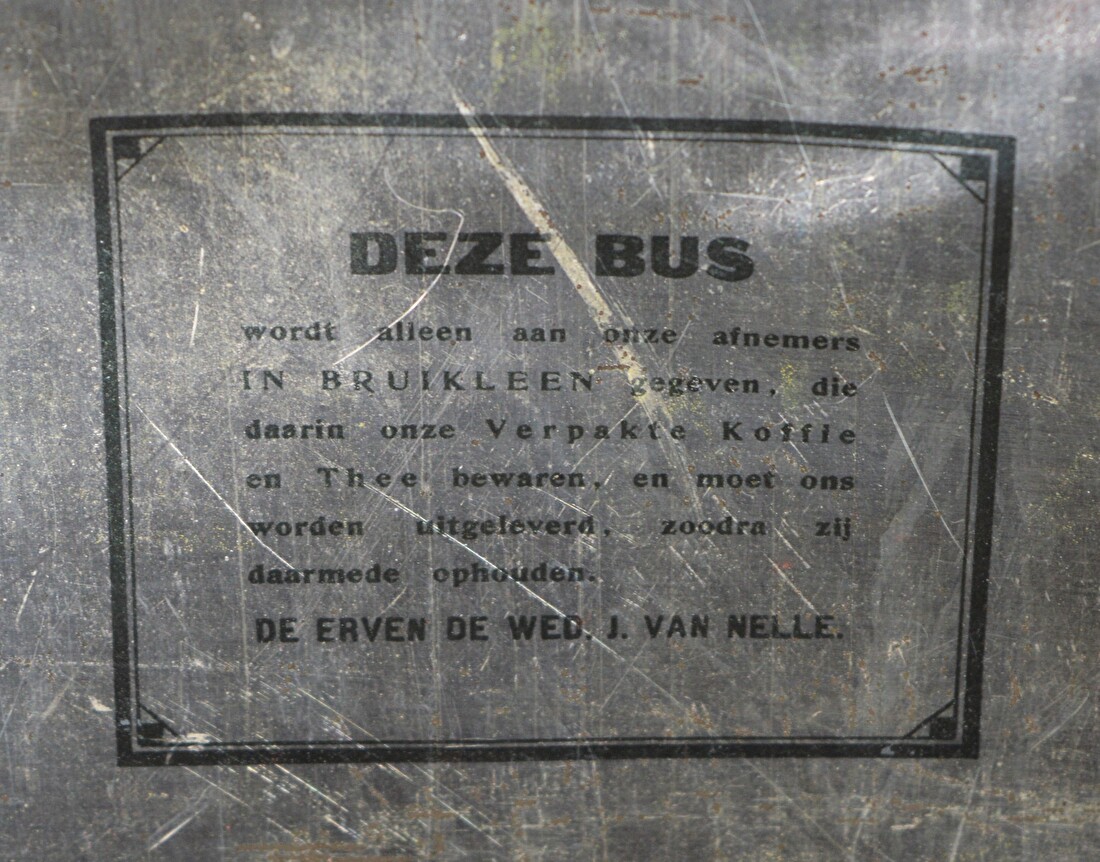 Condition
This Van Nelle counter shop tin for coffee and tea is in a beautiful vintage condition with traces of use and age-related traces of wear. Not rusted, good on the inside and bottom. Photos are part of the description.

Van Nelle was a Dutch manufacturer of rolling tobacco, cigarettes, coffee and tea.

Jacobus Johannes van der Leeuw built the company between 1837 and 1881. He established worldwide trade contacts, established his own plantations in the Dutch East Indies and built the shop into a coffee roasting factory and the processing of tobacco and tea. Around the turn of the century, coffee and tea became increasingly important. Van Nelle, therefore, made a great profit.

The company distinguished itself through its own approach, with appealing advertising figures such as Piggelmee. The period around the Second World War was difficult for Van Nelle. But from the fifties on, under the direction of director J.P. Coelingh it did better again.