Bric-a-Brac is a term that most people will have heard of. It was originally a word derived from the French, in which it had the meaning of curiosities, oddities or second hand. Literally translated it even means flea market. Brick-a-Brac also has affinity with the English word Broker, which stands for "pawnbroker or seller of second-hand goods'. When one speaks of ‘Bric-a-Brac’ it is often used for old objects that are not valuable or old enough to pass for genuine antiques. In order to be considered antiques, an object must be at least 100 years old. Instead of Bric-a-Brac one also speaks about semi-antiques. These items do not have to be perfect. The weathered appearance gives it it’s true character and appearance.

Often seen at Brick-a-brac and most familiar is Enamel. This is a protective layer of molten glass on objects made of metal or ceramic in order to protect it, to isolate, or just simply used as decoration. The word enamel is from the Old French word ‘esmailler’ and from the German word ‘smeltan’ which means liquefy or melt. An enamel layer has several useful features: email is very smooth (hygienic), it's very hard, fireproof and durable. Metal is protected by the enamel layer from corrosion. Because of colored oxides, the enamel layer is also decorative. 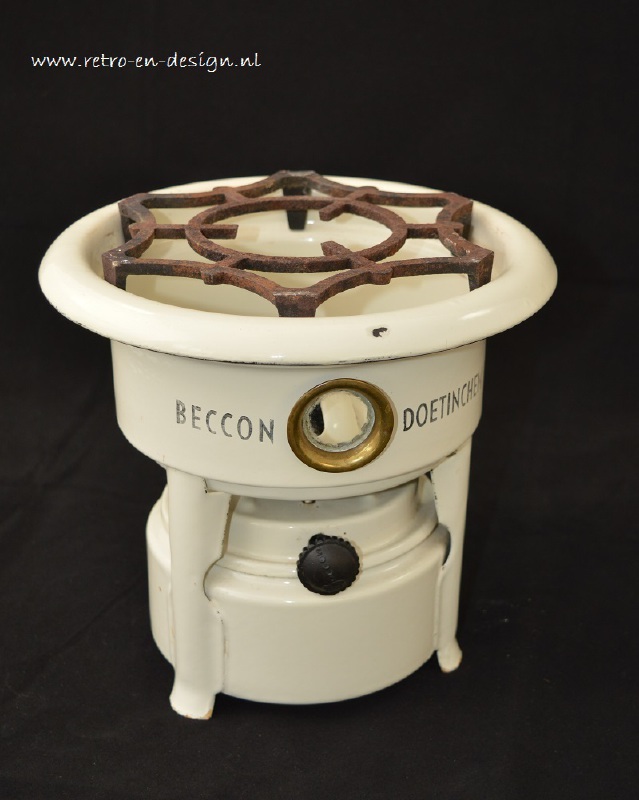 Metals which may be enameled are copper, aluminum, stainless and ordinary steel, cast iron, gold and silver. As an enamel layer is less flexible than the metal which it’s applied on, it may crack when rough handled or can even break in pieces. Traditionally, metal exteriors of household utensils are enamel. Usually white enamel is used in this case. With paraffin stove and pans  also other colors, were used such as Reseda green, dark green, petrol blue, black, red, orange flamed, mint green, cream and gray clouded. Some of these versions are now ancient, and because of this it is extremely popular in some kitchens and interiors.

Examples of enamel kitchenware are sand-soap-soda couple, milk box, coffee and tea pots, pans, canisters, bread bins, spoon rack, nest bowls, colander, petroleum stove, soap dish, measuring cup, candlestick, ewer, kettle, buckets and more. Also outdoor advertisings and road signs are often enameled. This is due to the high abrasion and corrosion resistance of enamel and because it can resist fading for 50 years. In the webshop Retro & Design there are regularly several vintage enamel articles to be found.