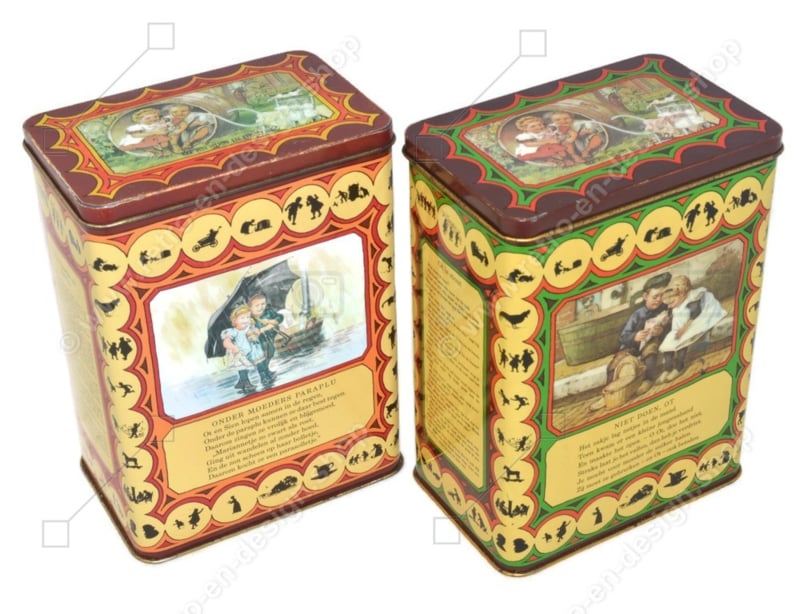 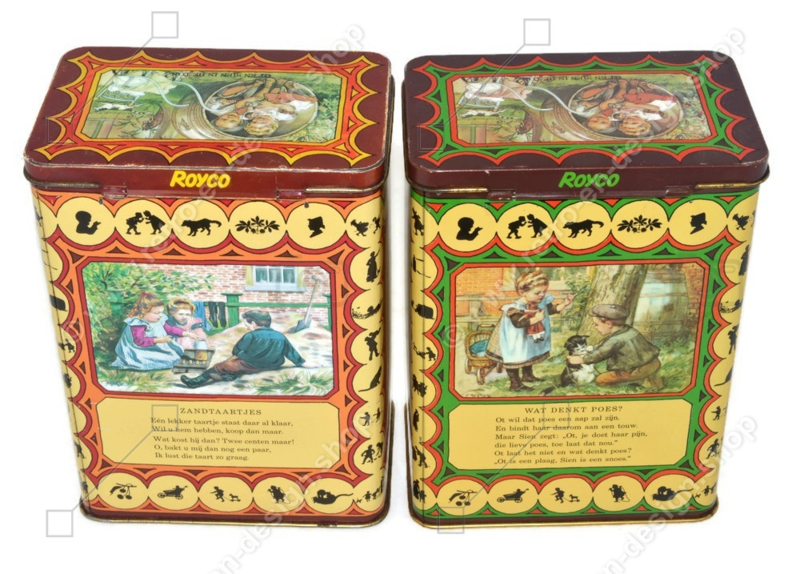 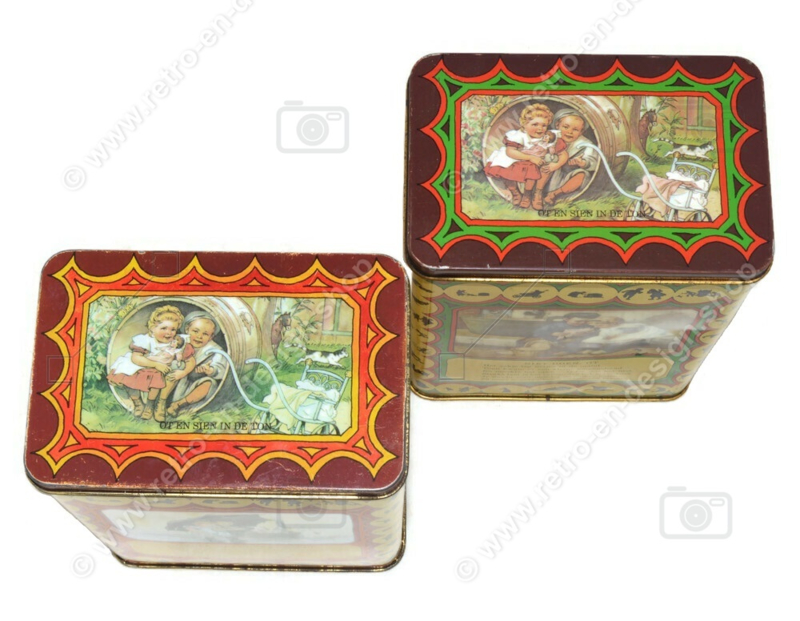 Vintage set of two tins for Royco soup with images of Ot and Sien by C. Jetses

Vintage set of two tins for Royco soup with images of Ot and Sien by C. Jetses.

Description
Rectangular vintage tins for Royco soup with as decoration images of Ot and Sien by C. Jetses, including the Dutch poems: What does the cat think, Sand Tarts, Don't do it Ot, Under mother's umbrella, A bear and a lady.

On the sides of the tin two more stories such as: What happened to the sugar, A gentleman and a lady, From cakes and pies

Beautiful set of two rectangular vintage Royco soup tins with hinged lid, needle hinge. Decoration: Cream-coloured background with mainly orange and green lines. There are black silhouette figures in the circles. On the front and back there are multicoloured Ot and Sien pictures in frames. Text: ROYCO, four texts about Ot and Sien.

Condition
This set of Royco tins is in good vintage condition with normal traces of use and age-related traces of wear. Photos are part of description.

Ot and Sien is a Dutch children's book series, written by Hindericus Scheepstra, a teacher in Drenthe, the Netherlands. It centers around two little children, a boy named Ot and a girl named Sien.

It was the start of a new method of writing children's books and had a profound influence on Dutch elementary education in the first half of the twentieth century.

Ot and Sien are the main characters in a series of Dutch children's tales that were very popular in the first half of the twentieth century. The first series titled Dicht bij Huis ("Close to home"), appeared in 1902. The second series Nog bij Moeder ("Still with mother"), followed in 1904. The author of the stories was Hindericus Scheepstra (nl). However, he acted on the inspiration of Jan Ligthart, who had the intention to expose young people to what he considered a healthy daily family life. The illustrations were made by Cornelis Jetses (nl).

After WWII the stories of Ot and Sien gradually went out of fashion and they were often ridiculed for the unrealistic picture they gave of life in the province. A century after their appearance there is a revival in the interest for the publications and in 2004 an exposition was held, focusing mostly on the artwork by Jetses.

Ot (short for Otto) and Sien (short for e.g. Francine) are two next-door neighbours, a boy and a girl. Their illustrations were based on two children that actually lived in Jetses' neighborhood. The stories are situated in Drenthe that was at the time the most impoverished province of the Netherlands where quite a few people were still living in dwellings constructed of peat and sods. The surrounding poverty is nowhere to be seen in the stories that depict a very idealized version of reality.

Kind of object
Two tins for soup by Royco